Creation of automation rules is available in the Task management - Automation rules menu. There is also a list of all created rules in the form of a standard table. To create a new rule, press the Create button.

For the new automation rule, you need to fill in the fields in the form.
Title field (1) is mandatory.
In the Description (2) field you can specify brief information about the created rule or its purpose.

The choice of users assigned by this rule to the task in the future depends on the settings:

The activated in the system for the first time (3) setting allows you to assign tasks to all new users registered in the system, regardless of the attributes specified in the profile.

The Will be assigned (9) block displays the list of attributes for which the automation will be triggered. In the example on the screenshot the assignment will be received by all users of Collaborator, Department of Customer Success , Head Office, Regional Department, Sales Department, Training Department who has the demo tag. 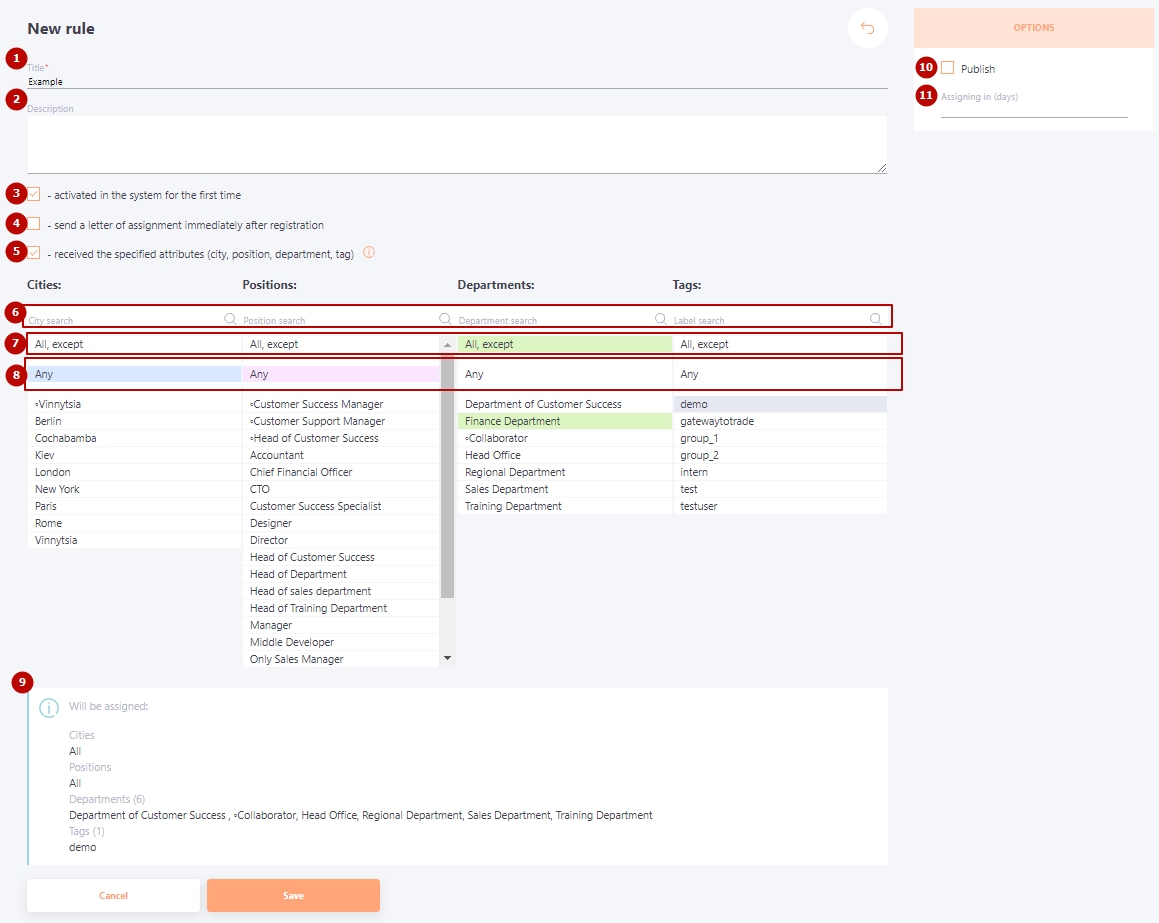 In order for a user to be assigned to a task by such a rule, the attributes City, Position, Department, Tags set in the automation rule must be the same as in the user's profile.
It is also possible that a user does not have one or more attributes, but must also be assigned to a task. In this case, you must set "Any" next to the group of attributes that the user doesn't have. Also, selecting "Any" for an attribute group allows you to sample all existing fields from the group or new fields created in the future. This is very convenient when importing new users and allows you to automatically assign the necessary tasks to new users with new attributes after importing.

1) Only checkbox activated in the system for the first time is checked - tasks will be assigned to all new users of the system after registration. All specified attributes for users (City, Position, Department, Tags) have no effect on the assignment. New users in the system include:

3) Checkboxes activated in the system for the first time and received the specified attributes (city, position, department, tag) are enabled - the automation rule will be assigned only to new users AND only if the specified attributes match (For example, to all new sales managers if the attributes specify the sales manager position and "any" parameter for the rest). If you execute such a rule manually, the assignment will be performed in accordance with the attributes (you can see who will be assigned to whom on the "list of users" page near a rule)

An example of a valid automation rule #

The Being used for tasks, notices and chat channels block contains a list of all tasks that will be automatically assigned to users with the specified attributes. These tasks were bound to the rule when you created them.